If There Was No Advertising 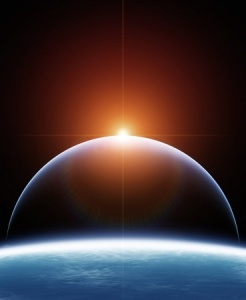 If there was no advertising, what would the world be like? It probably would be like the first time I saw the original Star Trek as a small child.

There was a melting pot of various races, human and alien. The small Starfleet insignia bound everyone together, with just 3 different colors of uniform designating general specialty. Basic needs were not a worry, as food and materials were instantly available with no need for money. Wealth was improving yourself, gaining understanding, helping when asked, and not forcing your will on others.

You never saw another logo for any brand and definitely no garish neon or billboards. TV and Internet didn’t exist. You asked the computer questions or searched the database. There were no voice-over commercials mingled with the computer responses or text ads at the top of the search.

Imagine what TV, radio, and the Internet would be like without advertising?  Would our lives be so different that those things didn’t exist at all?

The conflict in Star Trek was that the universe wasn’t a safe place. Strange creatures could be deadly or harmlessly proliferate all over the ship like Tribbles. Other beings may be more advanced, with an evil conquering agenda. On the other hand, the Prime Directive always seemed more like a guideline when dealing with primitive cultures.

We are a long way from the utopia of Star Trek, since people have to sell something to survive and egos often over-shadow common sense or courtesy. In a world where everyone is broadcasting themselves to the universe, how do you hear one voice out of that thunderous symphony of noise?

Despite the millions of options, the Star Trek crew was really only interested in the Class M planets that could sustain human life. In the Final Frontier, you do a lot more observing than trying to communicate. We could all learn from that lesson and practice our own prime directive, based upon communicating ideas rather than overt sales pitches to everyone.

As CEO of Matrixforce and creator of the Delta Method as seen at Harvard and Nasdaq, I believe the normal approach to business and technology is horribly flawed and a terrible experience for everyone, Streamline your technology to avoid willful neglect and enjoy competitive advantage by only using vetted IT support. View all posts by Kevin Fream